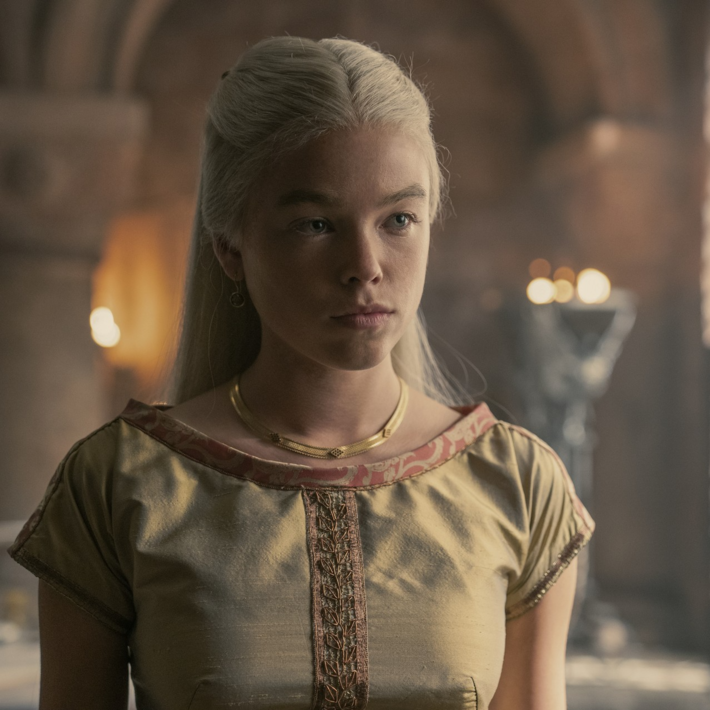 Rhaenyra Markov, was born to the Markov bloodline, a fitting trait was that she was given silver hair and blue eyes. She was a Princess before her untimely death at the hands of her husband. She grew up in a large family surrounded by their people one such being was her best friend and protector Edward Starhawk. He was a Lord’s son and a few years older than her since she at the time was only three and he was seven. They were the best of friends more like she trailed after him like a lost little puppy having a crush on the poor boy. After his seventh birthday he was taken to train to become a knight and defend their people and home. No matter where she went he was always right beside her in spirit since he was off training for years even on the day of her sixteenth birthday when she was given the news that she was to marry Prince Viserys in another land, an enemy, to solidify a peace treaty.

She sent a letter to her friend telling him that her father wished for her to marry a Prince confessing her dislike for this male. In those moments of peace when he returned to visit her in the castle she confessed to him that she did not want to be married off to someone she did not love. She confessed that night under an old willow tree her love for him in return he confessed his as well. She rebelled against her father’s betrothal Viserys, the son of their rival in favor of taking a lord’s son, Edward. Her father was pleased she was going to still marry but wasn’t pleased it wasn’t to Viserys.

him, he was off to settle a skirmish with some raiders against one of the villages. She watched him as he left and she closed her eyes and cried praying to the gods for his safety. Even though she would never see him, Alive or Human again.

The day seemed like any other as she wrote him a letter since he had only left a few days prior unknowingly distracting him and leading to his untimely death at the hands of the enemy. Less than a week later she was given a letter, Edward Starhawk, was dead. She cried inconsolably for days on end, it was not a week later when her father announced once more she was to marry Prince Viserys to solidify their peace treaty.

A month had passed since the passing of her beloved Edward, it was her seventeenth birthday and it was also her wedding day. She was forced by her father to marry Prince Viserys or else he would have her locked up until her dying day. She walked down the aisle with her father by her side, tears dripping from her face. She did not wish to marry this man she wanted it to be her beloved but he was gone and never returning.

By the end of that day what should have been the happiest day of her life, it was never the same again. She was married to another and she hated everything about him, the way he looked, talked and acted set her off. He was not her Edward and she hated him for it.

Two years quickly passed Rhaenyra by as the days grew longer she grew weaker and could not figure out why. She had been married to Viserys for two years and in those two years he hit her simply because she would not consummate their marriage, She refused to bed him. It enraged him so much that he took her by force one night.

As of late she had been getting weaker after every meal with him and she noticed each time they had dinner together he would watch her eat with a sick grin on his face. Oh she hated this man she realized nearly too late that he was slowly killing her by poisoning her food. She tried to send for a doctor but her Lord Husband made the page return to his post and no help was given to her. Unbeknownst to her she was being watched by her beloved though he was no longer human. He had just received details of her poisoning by her husband.

That night as she laid in her room her husband came for her one last time before the poison would surely take its final hold on her life. She laughed at him as he tried to get at her she stabbed him with her hidden dagger she kept on her person as a form of protection. She smirked as he died but it was too late for Rhaenyra; the activity of her killing her husband pushed the poison further throughout her body. She gasped for air as she clawed at her throat trying to dislodge a foreign object when there was nothing there.

There in her final moments she saw her beloved Edward, she thought he was death coming for her in a familiar form. However he was not alone; he was with another female, she was inhumanly beautiful but she never learned much more as her vision blurred and her heart slowed before sluggishly beating its last beats as silence filled the air. Princess Rhaenyra Markov, was dead in the arms of her beloved however fate had other ideas for her.

In moments of her heart stopping she was given a second chance at life but in return she would no longer see her family again. Her beloved with the help of his Sire, Esme, turned Rhaenyra, giving her a chance. When she woke up she was in a room with no windows but she could see perfectly well there she could see the woman she saw before her heart stopped. She later learned her name was Esme and was her grandsire. Esme told Rhaenyra of what she now was and what she would have to give up in the process.

After her first feeding she was with Esme and the Mysterious figure who she could tell was a male but he wanted to keep himself out of her direct line of sight. Esme taught her everything she needed to know about being a Valkyr and she took to it beautifully like she was born to be a Valkyr.

enough to comprehend what was going on around her, showed himself finally to her. The guilt that radiated off him for turning her into a being like him suffocated her and broke her unbeaten heart. She returned to their home for the last ninety years only to walk into a fight between Edward and Esme. She heard bits and pieces that they returned back to their home village and the town was overrun with crime and murder. Edward wanted to help rebuild the town but Esme thought it would be a risk to their safety.

It didn’t take Rhaenyra long after Edward left their little group that she herself couldn’t handle being with Esme. She ventured out in the dead of night leaving behind Esme going off into the world alone seeing everything, watching history unfold around her as her family name disappeared. She could easily pass as a long since descendant of her original family.

Many years later as she grew into her abilities and seeing the world around her, she always kept near the supernaturals, never once venturing near the humans unless to find a donor willing to offer their blood to her. She was currently a painter in Las Vegas, Nevada. She was painting a beautiful portrait for someone of the supernatural world. It was a gift for their human partner and in her opinion it was absolutely beautiful. The commissioner of the painting had come into her little room talking over the payment for the painting. She barely had any commissioned paintings in a long time; not many people wanted painting anymore; it was all about photography now. Her friend, Aemond Valyrian, who commissioned her painting told her of a town in Colorado called Evermore that was home to every sort of supernatural beings and there were humans there that were privy to that knowledge.

On a whim she packed her stuff and ventured across the states to Colorado to check out this town. She arrived at night sleeping during the daytime hours due to her aversion to sunlight. She found Cecilia and pleaded to her to let her stay to open a photography studio, Silver Shadow Photography. She was granted permission to stay amongst her kind and she couldn’t have been happier.

This group is to capture all of the moments you want to keep and remember on the site, so if something funny, special or memorable happened, take a screenshot or two of it  and post it in the comments below and we'll post it up here :DSee More
Jan 28
0 Comments 7 Likes

Here are all of the approved Original Character bios on the site, if your bio is not on here then your application has not yet been approved.See More
Jan 28
27 Likes

How did you hear about us?
an old member